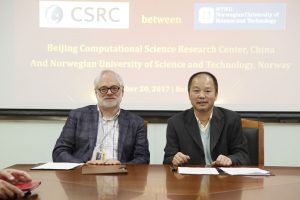 PoreLab is strongly involved in this collaboration together with QuSpin, the second Centre of Excellence within the department of Physics, NTNU. The pictures show the ceremonial signature of our agreement. Here is the news from CSRC: MOUs Signed between CSRC and NTNU, CSRC and UIO. 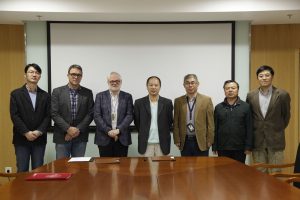 CSRC is a multidisciplinary fundamental research organization under the auspices of the Chinese Academy of Engineering Physics (CAEP). Established in August 2009, CSRC positions itself as a center of excellence in computational science research addressing current and critical issues in multidisciplinary areas of Mathematics, Mechanics, Physics, Chemistry, Materials Science, and Computational Science.

In particular, CSRC supports the development and implementation of grand challenging projects in natural science and engineering where computational modeling and simulation play a key role. CSRC also encourages its members to engage in the development of computational algorithms and software.

FEB. 24, 2021, Amy Ryan, Postdoctoral Associate in the Rock and Mineral Physics Laboratory at the University of Minnesota, USA