Our Newly Published articles provide view of research, ideas, and discussion in the field of Porous Media. 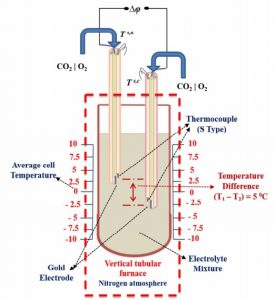 Industrial processes for the production of metals and alloys by metallurgical and electrochemical methods generate a lot of waste heat due to irreversible losses. This waste heat may be used as a power source to generate electricity. A thermocell with non-critical and inexpensive molten carbonate based electrolyte mixtures with reversible (CO2|O2) gas electrodes was reported recently. It demonstrates the possibility of utilizing the waste heat (> 550 °C) as a power source. Thermocell is an electrochemical cell with two identical electrodes placed in an ionic conducting electrolyte solution with a temperature gradient between the electrodes. The heat source will be used to create the temperature gradient between the electrodes, which will lead to a potential difference by executing ionic diffusion in the electrolyte. In this work, the thermo-physical and chemical properties of the electrolyte mixture were tuned by multi-component mixing with molten (K and Ca) carbonate and LiF additives into the binary (Li,Na) carbonates mixture. It reduces the liquidus temperature to ~ 400 °C and enables the molten carbonate thermocells to recover the high-grade waste heat available at even low temperatures well below 550 °C. Still, the Seebeck coefficient of the thermocells remains large (in the range of -1.5 mV/K).

Figure: The cross-sectional schematic representation of the molten carbonate thermocell

The Microseismic Emissions During Pneumatic Fracturing: A Numerical Model to Explain the Experiments

Modeling of fluid injection processes into a deformable porous medium is a challenging area of physics that has a wide range of applications like the food, construction, and petroleum industries. In this research, we investigate pneumatic fracturing of a porous medium experimentally and numerically in a Hele-Shaw cell. In the experiments, we inject air into the porous medium (initially random loose packed) to create compaction, channeling, and fracturing while monitoring the cell with accelerometers and a high-speed camera. Furthermore, we develop a numerical model in two steps: (1) a poroelastoplasticity-based model to explain dynamic fluid pressure variations and (2) a solid stress model based on Janssen’s theory. The contributions of the different pressure sources air in channels and solid stress in the experiments, and the simulations are compared with respect to amplitude and frequency. Afterward, the variations of the normal stress exerting on the plates are convolved with a Lamb Wave green function to generate acoustic emissions numerically. The physics behind the evolution of the experimentally recorded power spectrum of the out-of-plane plate vibrations are explained using numerical models. The frequency bands (in the simulated power spectra) are influenced by the size of the opened channels and the Hele-Shaw cell and are in the same range with the experimentally measured peaks of the acoustic emissions.

The thermal boundary resistance at semiconductor interfaces: a critical appraisal of the Onsager vs. Kapitza formalisms

We critically readdress the definition of thermal boundary resistance at an interface between two semiconductors. By means of atomistic simulations we provide evidence that the widely used Kapitza formalism predicts thermal boundary resistance values in good agreement with the more rigorous Onsager non-equilibrium thermodynamics picture. The latter is, however, better suited to provide physical insight on interface thermal rectification phenomena. We identify the factors that determine the temperature profile across the interface and the source of interface thermal rectification. To this end we perform non-equilibrium molecular dynamics computational experiments on a Si–Ge system with a graded compositional interface of varying thickness, considering thermal bias of different sign.

We study models of biological evolution and investigate a key factor to yield self-organized criticality
(SOC). The Bak-Sneppen (BS) model is the most basic model that shows an SOC state, which
is developed based on minimal and plausible assumptions of Darwinian competition. Another class
of models, which have population dynamics and simple rules for species migrations, has also been
studied. It turns out that they do not show an SOC state although the assumptions made in these
models are similar to those in the BS model. To clarify the origin of these differences and to identify
a key ingredient of SOC, we study models that bridge the BS model and the Dynamical Graph
model, which is a representative of the population dynamics models. From a comparative study of
the models, we find that SOC is found when the fluctuations of the number of species N are suppressed,
while it shows off-critical states when N changes according to its evolutionary dynamics.
This indicates that the assumption of the fixed system size in the BS model plays a pivotal role
to drive the system into an SOC state, and casts doubt on its applicability to actual evolutionary
dynamics.