PoreLab is a Norwegian Center of Excellence created in 2017 and situated at the Norwegian University of Science and Technology (NTNU) in Trondheim, and the University of Oslo (UiO). The Centre is organised into groups but there is a strong emphasis towards collaboration across these groups. Research fellows from different groups are co-located to encourage this.

At UiO, PoreLab is organized under the auspices of the Njord Center which is a newly established cross-disciplinary geoscience-physics center.

We work to advance the understanding of flow in porous media. Starting from a sound basis in physics we aim for a better description of flows that range from geological to biological and technological. 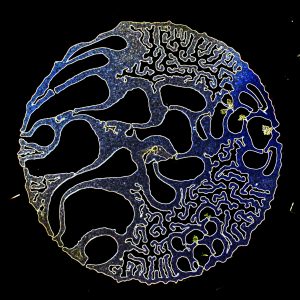 Drying pattern: Pattern formed in a drying process where a mixture of grains and fluid (blue area) between two glass plates is invaded by air (black area.) Picture courtesy: Department of Physics, UiO.

Porous media are all around us. In the ground, water fills the pores of aquifers, oil is found in porous medium. Pollutants may follow rainwater into the ground which is a porous medium; where do the pollutants end up? When underground water rises during earthquakes, they may push the soil particles apart so that it looses it strength with the results that building topple. Less dramatically, but extremely importantly, the physics of porous media is at the core of fuel cell technology.

A porous medium is a solid that is filled with holes. If these holes are interconnected, then fluids or gases may flow between them. How they do this constitute the physics of porous media. When there are several immiscible fluids competing for the same pore space and there is surface tension between the fluids, it becomes very hard to predict what these fluids will do when we simultaneously try to press them though the porous medium.

The existing theories used to handle this problem are rather sketchy and simply not very good. If we now add the complication that not only the fluids may flow, but also the solid, for example if the solid is an unconsolidated sand pack, the problem becomes extremely hard, and extremely interesting. 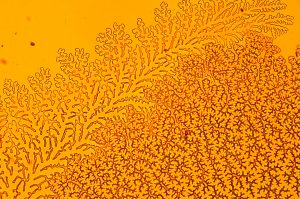 Gel pattern: A gel drying between two sheets. The lines show the front between air and gel. Picture courtesy: Department of Physics, UiO.

The flow of fluids and the unconsolidated matrix may form the most amazing structures and shapes. It is the aim of PoreLab to develop theories for describing these phenomena. We do this by using statistical mechanics and thermodynamics combined with fluid dynamics. Our approach is three-pronged: theoretical, computational and experimental. The researchers represent different scientific disciplines and it is the daily discussions between this diverse group and their visitors that is the motor of PoreLab.

A better understanding of the flow patterns in fluid cells will make them much more efficient – an important goal in a world that needs to become greener.

Why do we need Porelab?

Could we do this research without it? The answer is no. The vision for the center is ambitious and high risk. It addresses fundamental scientific questions in a field which, historically, has been dedicated to specific applications, thereby bringing the field to a new level, creating possibilities to solve new applications. Without the opportunity that the center offers to meet and merge fields, this outcome could not have been expected. Besides the science that is produced, perhaps the most important ambition of Porelab is a new generation of researchers that will bring the field much beyond state-of-the art. 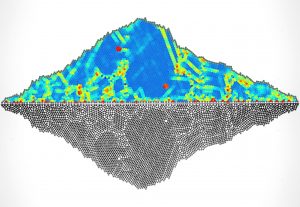 Disorder in a pile: A pile of small balls. The coloured mirror image shows the degree of disorder in different places in the pack. Picture courtesy: Department of Physics, UiO.