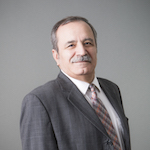 Where: on Zoom. To join, please follow the link below the abstract or add this event to your calendar by opening the attached calendar ics-file.

A unified approach to characterization of large-scale porous formations, and modeling and upscaling of fluid flow and transport in such formations is described, which is based on multiresolution wavelet transformations. The problems that have been studied include analysis of well logs and determining cross-correlations between various well logs; determining fracture density, analysis of time-dependent phenomena, such as wave propagation and well testing, and upscaling of single-phase permeability, dispersion, and miscible and immiscible multiphase flows in porous formations to reservoir scale, all within a single and unified framework based on wavelet transformation. In particular, the upscaling method reduces the computation times by at least three orders of magnitude, which is totally unprecedented. Then, an upscaling method for a geological model of a reservoir is described that is based on a completely irregular computational grid, which promises to be useful for both fractures and unfractured porous media. Finally, a method is described for speeding up computation of fluid flow in three-dimensional images of porous media that is based on curvelet transformations, a generalization of the wavelets.