Read how the catastrophic propagation of fractures can be explained by their extreme temperature. Or how to generate a small ‘sun’ with some adhesive tape.

“The fractoluminescence phenomenon, that is, the emission of visible light when a material breaks, is generally unknown from the general public. It is yet rather easy to observe it, as one may only need to quickly unroll some adhesive tape in the dark (as shown in the picture). This intriguing phenomenon can be explained by the extreme temperature – thousands of degrees – potentially reached very locally by the glue, at the place where it detaches from the roll. An adhesive that brutally fails could thus be hotter than the surface of our sun!

A standard adhesive tape (to the left) quickly unrolled in the dark (image on the right). The dashed rectangles highlight the same area in both pictures. The blue light could arise from an adhesive temperature reaching about 7000°C.” 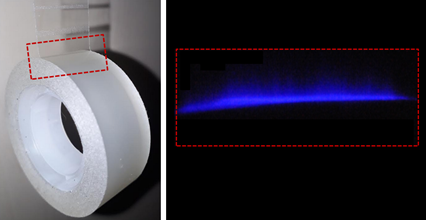 Picture: A standard adhesive tape (to the left) quickly unrolled in the dark (image on the right). The dashed rectangles highlight the same area in both pictures. The blue light could arise from an adhesive temperature reaching about 7000°C.